Extinction Bursts: Why It Always Gets Worse Before It Gets Better 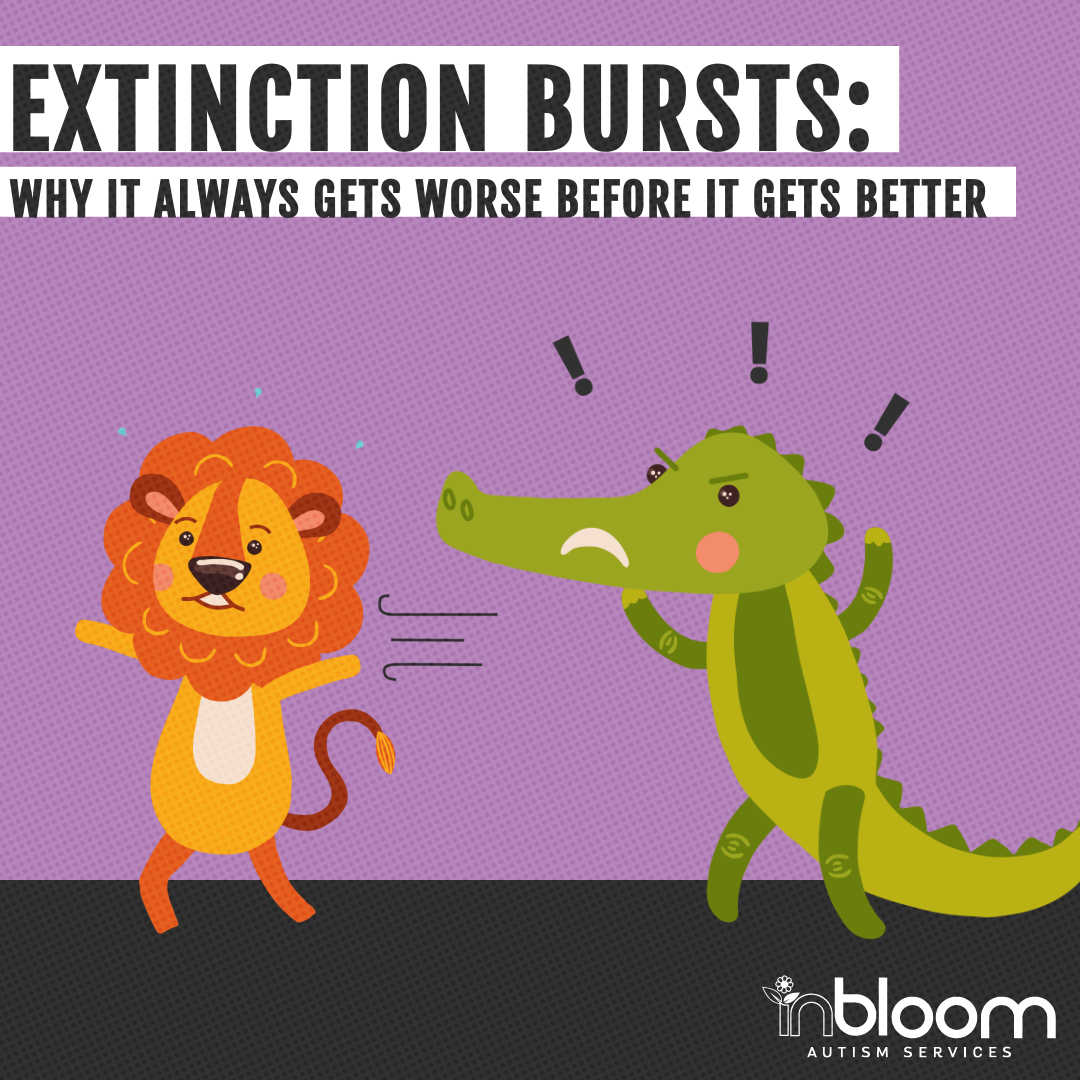 You’ve heard the cliches: “Its always darkest before the dawn…” or, “Before something great happens, everything falls apart…”? Well, they’re actually both pretty darn accurate in the world of ABA. When things get worse before they get better, we refer to that as an “extinction burst”. To better explain extinction bursts, why they happen, what they mean, and how it all applies to how we behave as humans, let’s walk through this very common (and extremely frustrating) scenario involving a vending machine and your favorite candy bar…

Jim uses the same vending machine every day on his lunch break at work. Every afternoon, he puts in a $1 bill, and pushes option “B6”. Within seconds, the machine buzzes and whirs as the corkscrew begins twisting. In just a few moments, he has a tasty Snickers in his hand and is on his way to sugar-fueled happiness.

One day, Jim puts in his $1 bill, pushes “B6”, hears the same whirring and his mouth starts watering in anticipation of his typical post-lunch treat. Right as the Snickers bar comes to the edge of the corkscrew, the machine’s buzzing comes to an abrupt halt: The Snickers is stuck! $#%&!

In this scenario, Jim’s behavior of putting money into a vending machine has always been an effective way to get a Snickers bar until this very moment. Now, his behavior of using the vending machine to get a snickers bar is being extinguished. Extinction is when we withhold reinforcement (or reward) for previously rewarded behavior. What do you think Jim will do now? Will Jim shrug his shoulders after the first attempt and walk away, or will Jim try a little harder to get that candy bar?

Jim will most-likely try pushing the button again. Maybe he didn’t push it hard enough. This time, Jim pushes the button deliberately, and probably even holds it down. The Snickers doesn’t come through. At this point, Jim may begin pushing the button several times in a row. I know right now you are picturing yourself in Jim’s shoes. We’ve all been there before. I am Jim…Jim is me…and we both want that candy bar, gosh dangit.

Depending on how bad Jim wants that candy bar, and how dependable this vending machine has been in the past, Jim might continue with alternative methods to get the Snickers. This might include pushing the return button, and then maybe giving the machine a little nudge. If that doesn’t work, maybe Jim will shake the machine with more force! The extent to which the behavior escalates will depend on the person, and what is motivating them.

This analogy can be applied to any behavior that used to be an effective way to get something, but is no longer working. Since it worked before, people will attempt to exhaust the possibilities before moving on, or giving up. Think about some ways you can remember a child’s behavior having previously worked in getting them something that they want (your attention, access to a toy, or getting out of something they don’t want to do). If it’s worked in the past, and it suddenly stopped working, they are not going to shrug their shoulders and walk away. They are going to become frustrated that their behavior is suddenly ineffective, and they are going to try harder.

This wave of problematic behavior getting worse before it gets better is…you guessed it… an extinction burst. You’re getting the hang of this! Guess what…now that the extinction burst has begun it’s going to get worse, and it’s going to be difficult to ride the wave, but eventually it will get better. Eventually, Jim will walk away from the vending machine. By following through on the extinction burst, and not giving in to the behavior, we are teaching the person that the behavior is no longer an effective way to get access to what they want! If the Snickers finally came out after minutes of pushing buttons, shaking the machine, and tipping it over, what do you think Jim would learn? Jim would learn that escalating the behavior is an effective way to get the Snickers if he initially doesn’t get it the first time. This is why it is crucial to stick it out during an extinction burst, and try to follow through on the process of extinguishing the behavior!

For all of our fellow ABA nerds out there, check out the data collection graph below. This graph demonstrates how we would actually collect data throughout the entire process in order to properly track Jim’s behavior: