DTT vs NET…Which Is Best? 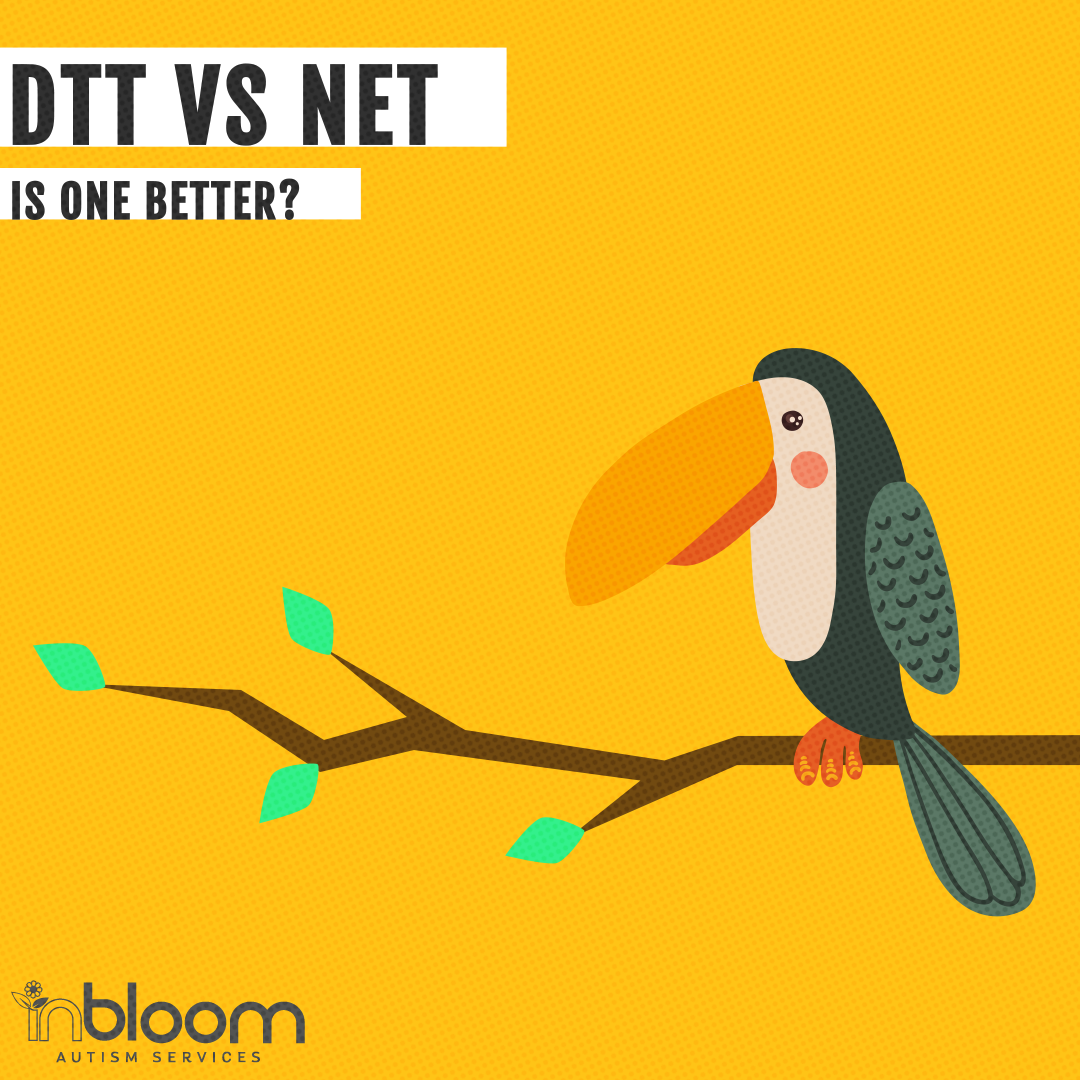 When you start doing research on ABA practices, most folks come across the acronyms DTT and NET, but does anyone REALLY know what they mean? And do we REALLY know which one is the best to use with our kiddos? It can be a little confusing at first, but we’ll do our best to explain!

DTT stands for Discrete Trial Teaching and is a form of teaching which is highly structured, fast-paced and is typically done in a 1:1 format with the kiddo and the therapist either at a table or another controlled environment. These sessions are fast-paced—as to maximize the learning opportunities while minimizing distractions in a short duration of time. It is not uncommon for there to be over 20 goals worked on in a single hour session!

In Discrete Trial Teaching, the child performing the desired behavior will receive either immediate reinforcement, such as praise, small snacks, or toys; or an incorrect response will result in some form of error correction. Lastly, the implemented reinforcers are based on the kiddos preference and may not be functionally related to the behavior being worked on. For example, if the goal is for the child is to point to a picture of an apple, pointing to the correct picture would result in praise and a Skittle, while touching the wrong picture would result in the therapist correcting the error and then presenting the task again.

NET on the other hand, stands for Natural Environment Training and is a form of teaching that occurs in loosely structured sessions, which are initiated and paced by the child, can take place in a variety of locations such as the home or a playground, and utilize a variety of items and activities which are chosen by the child. For example, while at the child’s house, the kiddo points to a ball, and the therapist might take this opportunity to work on getting the kiddo to ask for the ball. They may perhaps start learning how to take turns throwing it back and forth. During a NET session it is not uncommon to only work on a few goals per session, as it depends on what the child is motivated for each session.

Lastly, the biggest difference is that unlike DTT, which has a predetermined reinforcer that is earned when the child engages in the correct response, in NET, the reinforcer is the item the child showed interest in at the start. For the above example, the child wanted the ball, the therapist prompted them to say “ball,” and then they gained access to the ball (which is what they wanted all along!)

So…which teaching method is the best for our kiddos? The answer is actually both in most cases!

A well-rounded ABA program would use a combination of the highly structured and fast-paced DTT to teach a large amount of skills with minimal interruptions, but would also take advantage of NET opportunities so the kiddo can learn to use the same skills that they mastered in DTT in other places such as the park, the home, or ANYWHERE. Think about it: How helpful would it be for our kids to learn to ask for a toy appropriately, but they can ONLY ask for it when sitting at a specific table with a specific therapist?

But as a final thought, even though intertwining both of these strategies into an ABA program is TYPICALLY preferred, there are some instances where our kiddos may benefit from a program consisting of ONLY NET teaching. For instance, some of our older kiddos who are working on social skills or daily living skills do not need the structured environment in DTT anymore as the best place to work on these skills is in the environment where they will actually use the skill. Another example is our early learners who are just starting out with ABA and aren’t ready for the fast-pace and high level of demands associated with DTT. Utilizing play-based NET teaching is a better way to begin to teach the prerequisite skills needed to be successful with a DTT program.

In order for our kiddos to have the absolute best results, it is crucial that ABA providers have a clear understanding of both of these methods, when to use them and how to incorporate them seamlessly into their therapy sessions.