The History of Applied Behavior Analysis 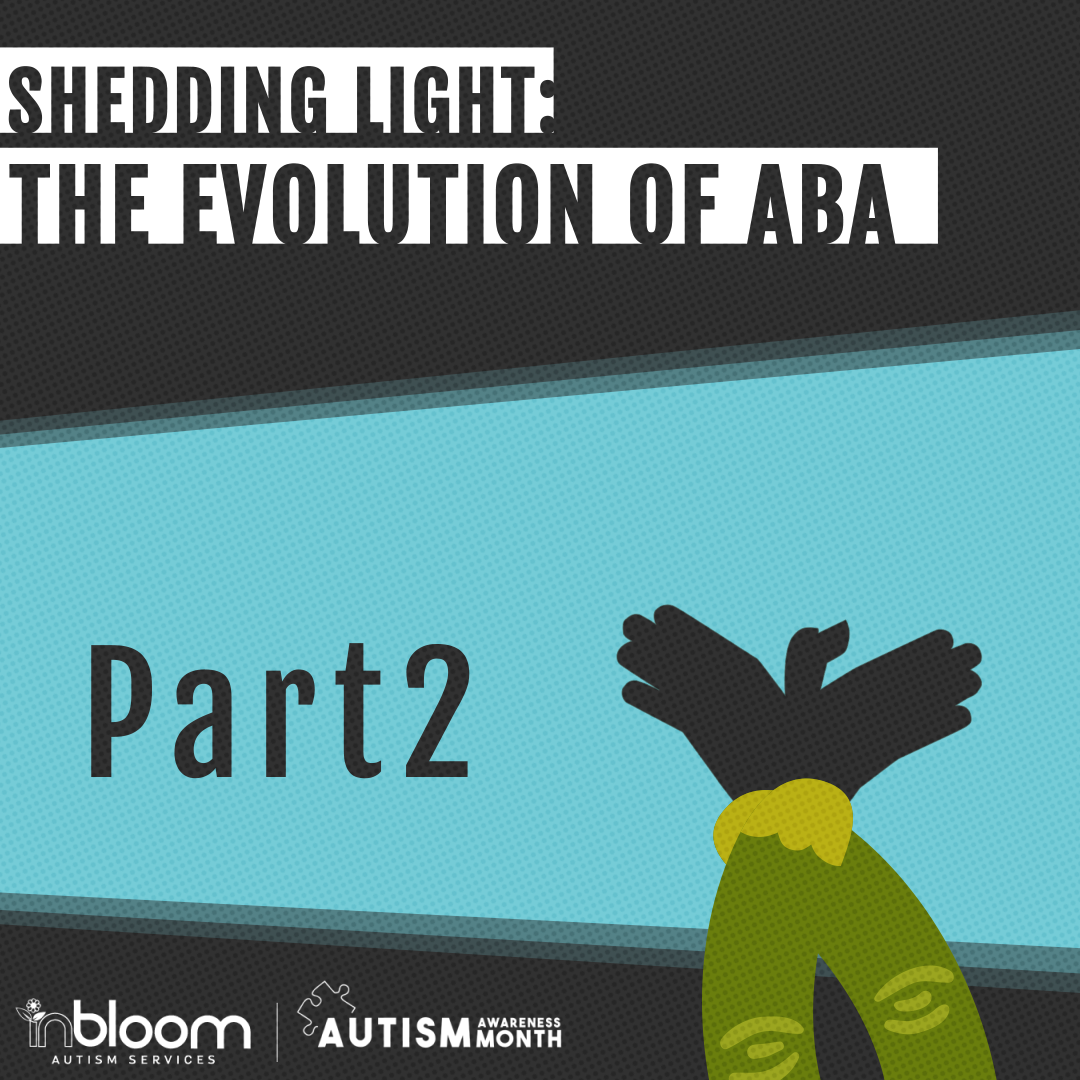 Applied Behavior Analysis wasn’t always a “thing”. There was a point in time where behavior wasn’t studied, analyzed, or intervened on in the formal way that ABA is now, and that wasn’t even that long ago. At the same time, there isn’t really a clear “date of origin” because ABA is a a field that is constantly evolving and growing with new research. It’s been a fluid science that has developed over decades, and goes way back to the initial studies of behaviorism, or the systematic study of human and animal behavior.

In its development, ABA has taken on a variety of faces, practices, and procedures as it’s been fine tuned and grown into the outstanding science that it is today. Like many great sciences, in its past it used some methods that are no longer considered “best practices”. It has had it’s growing pains, which are important to recognize today. By recognizing where a science has originated, we can keep a sharp focus on the direction it should be going.

By recognizing where a science has originated, we can keep a sharp focus on the direction it should be going.

*Kicks legs up and clears throat*

Let me take you back…Way back to the earliest days…

Before the 1920’s, the dominating schools of psychology focused on the inward–thoughts, feelings and consciousness. This is what most people typically think of when we think of psychology: Freud, a fancy chaise lounge, and uncomfortable slips of the tongue or awkward dream analysis. Although this tends to be the image most people draw to their mind, there were many other different schools of psychology that took a different approach to how the psyche works. They all had one thing in common though–They were focused on mapping out the inner experience, and studied the unobservable.

In 1924, these schools of psychology were challenged by John B. Watson who developed the school of thought known as Behaviorism. This school was a reaction to the focus of inward thoughts, and re-shifted the field to look at only observable, measurable behaviors. Watson believed that learning occurs through interactions with the environment, and that “consciousness” was just another term for the “soul”.

If you’re about to clutch your child to your chest as you run from this blog–hang tight. ABA has progressed deeply from here, and we know that your child has consciousness.

Along came Pavlov…and his dog! Ivan Pavlov is a behaviorist who followed in Watson’s footsteps, and then took behaviorism a step further. Anyone remember the classic example of Pavlov’s dog and the bell? (haha get it…because….classical conditioning?)

Dog salivates for food, not for bell. Scientist rings bell when presenting food. Dog now salivates for bell. This suggested that our involuntary behaviors (like salivating) are not happening merely because of internal thoughts, but as learned reactions to our environment!

Well then, B. F. Skinner took this guy Pavlov and raised him one by developing the theory of Operant Conditioning, which involves changing voluntary behaviors as a result of experiences that occur after the behavior. Example: think of all the things that might happen if you were to bring a 5 gallon tub of ice cream to work on Friday:

Depending on what the response was after you brought the ice cream, your behavior of bringing ice cream might change in the future. You might bring it more often, or less often depending on what result occurred.

This is the beginning of Behaviorism…and from this school of psychology, Applied Behavior Analysis was born.

Ole’ Ivar Lovaas came into the picture as a in the 1960s with what was called The Lovaas Method, or Applied Behavior Analysis. He pioneered the proposal that Skinner’s Operant Conditioning could be applied as an effective treatment in “treating Autism”.

During Lovaas’ initial implementation of these procedures, he garnished highly successful results! He published peer-reviewed research in 1987 that showed markedly significant improvements for 90% of the children in his study when compared to the control group (or those who received no specific intervention). Subsequent follow up studies in 1993 showed that those children maintained their skills in early adolescence.

This success was achieved with many awesome techniques that are still used in ABA today such as reinforcement, differential reinforcement, and environmental manipulations. These interventions focus on using rewards, motivation, and learning to increase appropriate behaviors or new skills.

Other techniques and interventions that were effectively used in his research are no longer considered best practices of ABA or behavior modification. Some aversive punishment methods that were previously used included shock therapy to reduce the amount of stereotypy, or repetitive automatic behaviors, that children with ASD frequently engage in. This method was mainstreamed in the 1970s where the child would sometimes receive an aversive, painful (but not damaging) Electrocurrent shock following an unwanted behavior, like hand flapping. Many parents advocated for this treatment as it produced strong results in reducing problematic or unwanted behavior. Techniques other than shock therapy were used as punishment procedures to reduce these behaviors, but this method is the most notorious.

ABA has come a long way since these practices. Clinicians are using more ethical treatment procedures that are still effective in garnishing results. Treatments focus on using methods like positive reinforcement to motivate children to engage in the desired behaviors. These reinforcement systems are based off of items or activities that the child has identified as reinforcing and fun, and the rewards are provided consistently and frequently.

ABA has come a long way since these practices. Clinicians are using more ethical treatment procedures that are still effective in garnishing results.

Sometimes in ABA, instead of rewarding the right behaviors, therapists will need to focus on decreasing an undesired or inappropriate behavior. The techniques and procedures that are used should be both evidence-based, as well as ethical and humane. Examples of some procedures that might be used include temporarily removing access to a reward that the child has previously earned, or having the child repeat the task again until they can engage in it correctly.

ABA finds ways to creatively replace behaviors that may impede on a child’s daily life or cause safety concerns by giving them alternative behaviors to engage in. These replacement behaviors typically give children access to the same things, attention, and sensations they may be looking to get, but in a way that is not causing harm or preventing them from learning important life skills. Examples of this might include teaching your child to request a break during homework by pointing to a picture, instead of them ripping their homework when they are frustrated. Another example includes teaching your child to push their body onto a designated soft crash pad instead of slamming their body into the floor or walls.

ABA is different for each learner, and may involve learning in a more structured setting, such as at a desk or a kitchen table. Other learners may benefit more from learning in a natural environment, such as in a kitchen, or in a playroom. ABA finds ways to incorporate skills and learning into the environment where your child is already most comfortable.

A quality ABA provider should be discussing these treatment options and choices with you, and making sure that parents are in the loop! Through Parent Training, parents can become a part of the therapy process from the very beginning, and see how just slight modifications in their daily environment and interactions can make significant changes in their child’s behavior. As research continues to be conducted, the field of ABA will always be fluid–much like other sciences and practices such as medicine, biology, and psychology.