What’s the Deal with Positive and Negative Reinforcement? 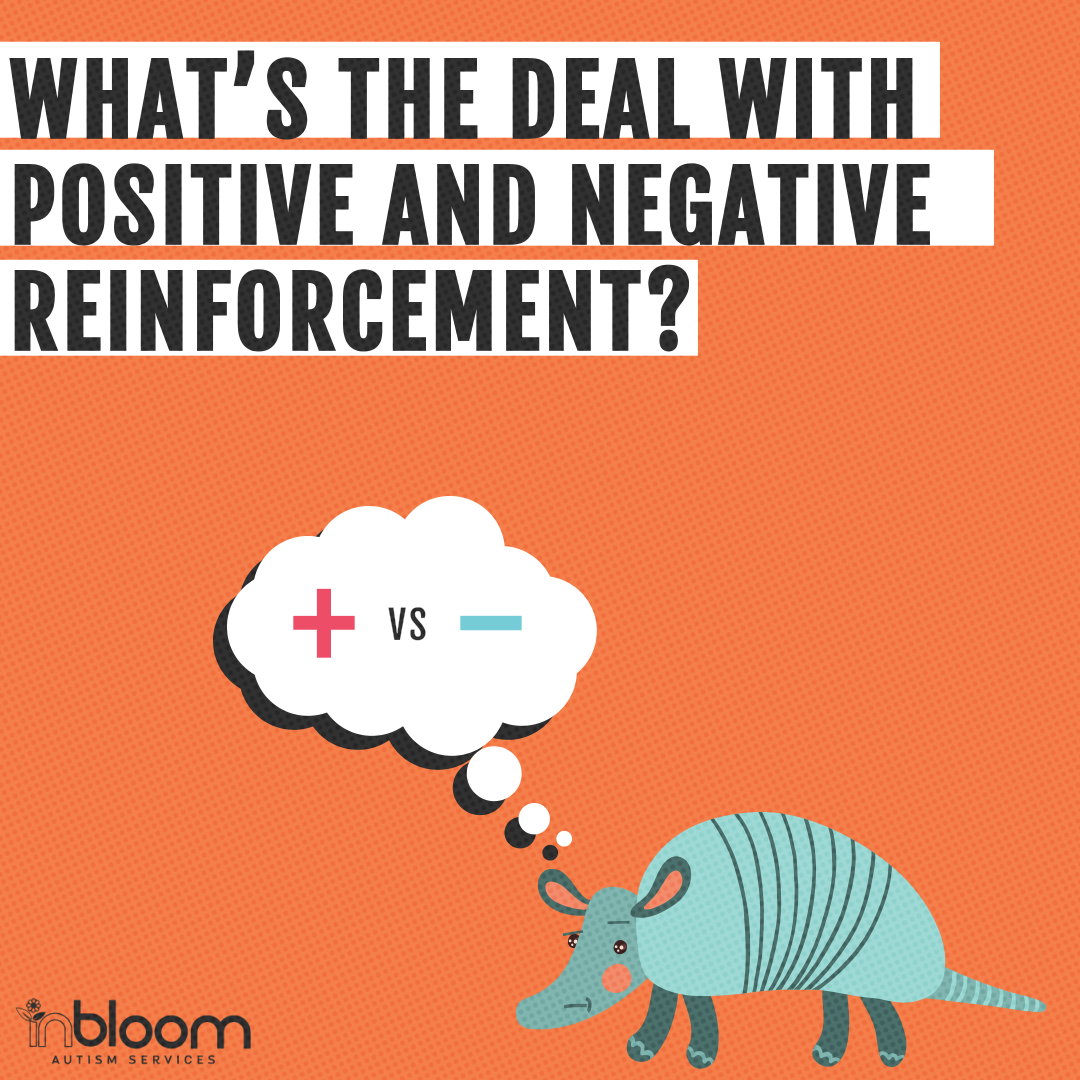 Picture this: you are watching your favorite tv sitcom or your favorite 80’s movie, and all of a sudden you hear the words “positive reinforcement” used to describe a way of rewarding behavior! And, if you’re anything like me, you’re super excited because you love ABA so much, that when these terms are used in mainstream media it’s so reinforcing! The definition that your favorite fictional character gives of positive reinforcement is so spot on that you are on cloud nine. That is, until they define negative reinforcement… This definition is almost always wrong and all that excitement you were feeling only seconds ago is instantly shattered and replaced with sadness, anger, and overall fury–as how hard could it really be to pick up an ABA book and read the definition of negative reinforcement? Well, let’s see!

First, let’s backup a second. Before we start thinking positive and negative, we need to define ‘reinforcement.’ Reinforcement is a process by which an item or event following a chosen target behavior increases the probability that the behavior will happen again in the future. For example, if every time Johnny raises his hand in class and the teacher says, “Awesome job, Johnny,” because Johnny loves to be praised in front of the entire class, he now raises his hand each and every time he wants to talk to the teacher. For Johnny, verbal praise would function as a reinforcer for raising his hand because it increased the likelihood of this response continuing in the future. Easy enough, right?

In ABA lingo, when the word ‘positive’ is paired with reinforcement, you can think of it as more like an addition sign; whereas the word ‘negative’ should be seen as a minus sign.

So, if reinforcement always increases the likelihood that the targeted behavior will occur in the future, where does ‘positive’ and ‘negative’ come into play? To really understand the difference between positive and negative reinforcement–and use the terms correctly–we must first understand what we mean by positive and negative. Typically, when you think of something as positive you think “good” and something negative is “bad,” right? Well, in this case, you would be wrong. In ABA lingo, when the word ‘positive’ is paired with reinforcement, you can think of it as more like an addition sign; whereas the word ‘negative’ should be seen as a minus sign. Respectively, we are either adding something to the environment following a behavior or response, or taking something away following a behavior or response.

For example: praise, food, money, a hug, or high fives are all types of positive reinforcement, as they are all examples of things we are giving a person. In every case, we’re adding to their environment immediately following a behavior or response, with the goal of increasing the likelihood that they will continue to engage in that behavior or response in the future. As another example, think of this: at the end of a week at work, you receive a paycheck. That paycheck is positive reinforcement, as it something added to your environment (or your bank account) that increases the likelihood that you will come back to work the next week.

Negative reinforcement is the removal of an item or unfavorable condition to, again, increase the likelihood that the targeted behavior will occur in the future.

If adding to the environment and increasing the occurrence of the targeted behavior is positive reinforcement, then what is negative reinforcement? Negative reinforcement is the removal of an item or unfavorable condition to, again, increase the likelihood that the targeted behavior will occur in the future. To illustrate: Johnny hates having to eat carrots, so when his parents present him with a plate of carrots he begins to scream and cry and as a result, his parents remove the aversive item (i.e. the carrots) and throw them away. Now every time Johnny’s parents present him with food he doesn’t like, he is more likely to cry and scream, as he has learned that this behavior ensures that the undesired food will be taken away. Or another example is, if you’re like me, you absolutely hate getting headaches! So, I’ve learned when I get a headache, if I take Advil or aspirin, I can escape the pain of the headache. As a result, every time I get a headache or feel one coming on, I take Advil or aspirin and I get to escape the aversive situation of headaches. Taking the Advil to remove the aversive situation of having a headache would function as negative reinforcement.

Now, it is my hope that I have fully armed you with the knowledge of these seemingly tricky ABA terms and adequately prepared you to go out into the world and not only recognize these terms when they occur, but also to use the terms correctly. Next time you’re relaxing at home with your family and without asking, your spouse or child does the dishes without being told, you will know exactly what to do to ensure this behavior continues to occur in the future as well as the type of reinforcement you used. Or next time you’re at work, take time to recognize positive and negative reinforcement at play. If, for instance, employees have complained about having to get up early for weekly staff meetings, but they have learned they can escape them if they meet the set criteria a week before (and they repeatedly meet that set criteria), you will recognize that negative reinforcement is at play!

Remember that knowledge is power. So be warned: now that you understand the correct definitions of these terms and recognize them in your daily life, the next time you watch your favorite show or movie and they reference reinforcement, you may want to jump off of your couch and through your TV the moment they incorrectly define negative reinforcement as positive punishment! But wait, “what’s positive punishment,” you ask? Well, stay tuned as we tackle positive and negative punishment another day.